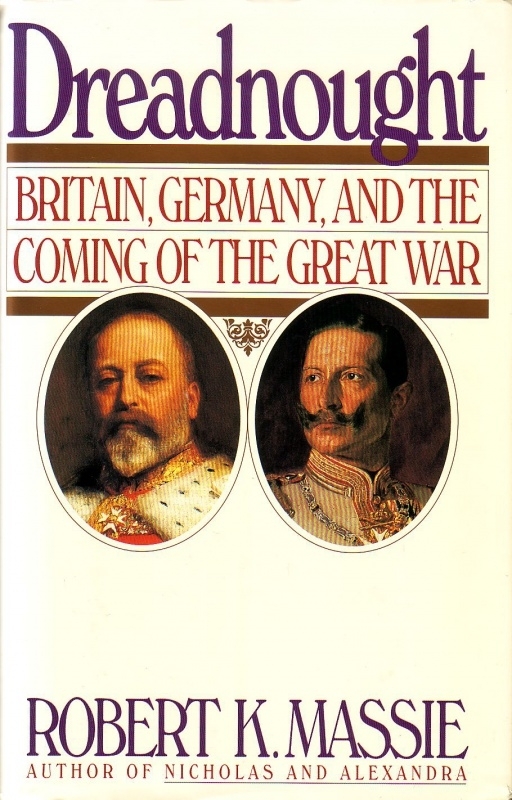 Dreadnought: Britain, Germany and the Coming of the Great War.

In a major literary event, Robert K. Massie, author of the international best-seller Nicholas and Alexandra and the Pulitzer Prize-winning Peter the Great, has written a richly textured and gripping chronicle of the personal and national rivalries that led to the twentieth century´s first great arms race. Not since The Guns of August has modern European history come so vividly to life.

Throughout the nineteenth century, the era of Pax Britannica, Britain ruled unchallenged on the world´s oceans. Supreme at sea, untouchable in their home islands, the British disdained continental alliances and prided themselves on a diplomacy of ´Splendid Isolation´. Then, in 1871, the Prussian Titan Otto von Bismarck created a new continental superpower, the German Empire. England observed Bismarck´s handiwork, but maintained an amicable diplomatic relationship, enhanced by the family ties between the Prussian House of Hohenzollern and the predominantly German royal family of Great Britain.

In 1888, Queen Victoria´s twenty-nine-year-old grandchild became Kaiser William II. Within two years, Bismarck was forcibly retired and William had initiated a policy of Weltmacht [World Power] to display and wield the bursting economic and military strength of Imperial Germany. The key to this policy - and the ambitious young Kaiser’s most fervent desire - was the construction of a powerful German navy. To this task he assigned the relentlessly single-minded Admiral Alfred von Tirpitz.

Day by day, year by year, Robert K. Massie describes Britain’s slow awakening to the ominous threat arising across the North Sea, the gradual shift in British diplomacy as Splendid Isolation was abandoned and Britain reached out to her two historic antagonists, France and Russia. Their understandings, spurred by fear of the expanding Germany fleet, ripened into the Triple Entente that became the anti-German alliance in the First World War.

On this multidimensional canvas, a crowd of glittering figures appears. There is Queen Victoria, of German ancestry, ‘Granny’ to most of the crowned heads of Europe. There are the King and the Kaiser, uncle and nephew, Edward VII and William II: the nephew vain, flamboyant, often charming, ambivalent toward Britain, in Edward’s words, ‘the most brilliant failure in history’; the uncle, who did not come to the throne until he was fifty-nine, a cosmopolitan playboy with a remarkable fund of common sense, in William’s words ‘an old peacock’, even ‘a Satan’.

And there are the politicians, diplomats, admirals, wives, and mistresses. In Germany, Chancellor Bernhard von Bülow had a reputation for sycophancy and political slithering that earned him the nickname ‘the eel’; spidery, reclusive Fritz von Holstein knew and kept all the secrets of the Wilhelmstrasse; and Philip Eulenburg, the Kaiser’s closest friend, shook the throne in a wide-reaching homosexual scandal.

In Britain, there are the august and distant Prime Minister, Lord Salisbury; the Radical screw manufacturer from Birmingham, Joseph Chamberlain, who became Britain’s most popular politician; Arthur Balfour, a Prime Minister admired by women for ‘the lovely bend of his head’; Sir Edward Grey, Britain’s greatest twentieth-century Foreign Secretary, who spoke no foreign language and refused to travel abroad; H.H. Asquith, who as Prime Minister presided over Cabinet meetings while writing passionate letters to one of his daughter’s friends; young Winston Churchill, who served as a brash First Lord of the Admiralty; and Jacky Fisher, the eccentric genius and admiral who revolutionized the British Navy and brought forth the first true battleship, H.M.S. Dreadnought.

Their story and the story of the era, filled with misunderstandings, missed opportunities, and events leading to unintended and ruinous conclusions, unfold like a Greek tragedy in this powerful narrative. Moving back and forth between London and Berlin, Windsor Castle and the New Palace in Potsdam, Parliament and the Reichstag, the British Admiralty and the German Navy Office, Robert K. Massie, with the biographer’s rare genius for expressing the essence of extraordinary lives, dramatically re-creates the events that propelled Europe and the world headlong toward Armageddon.